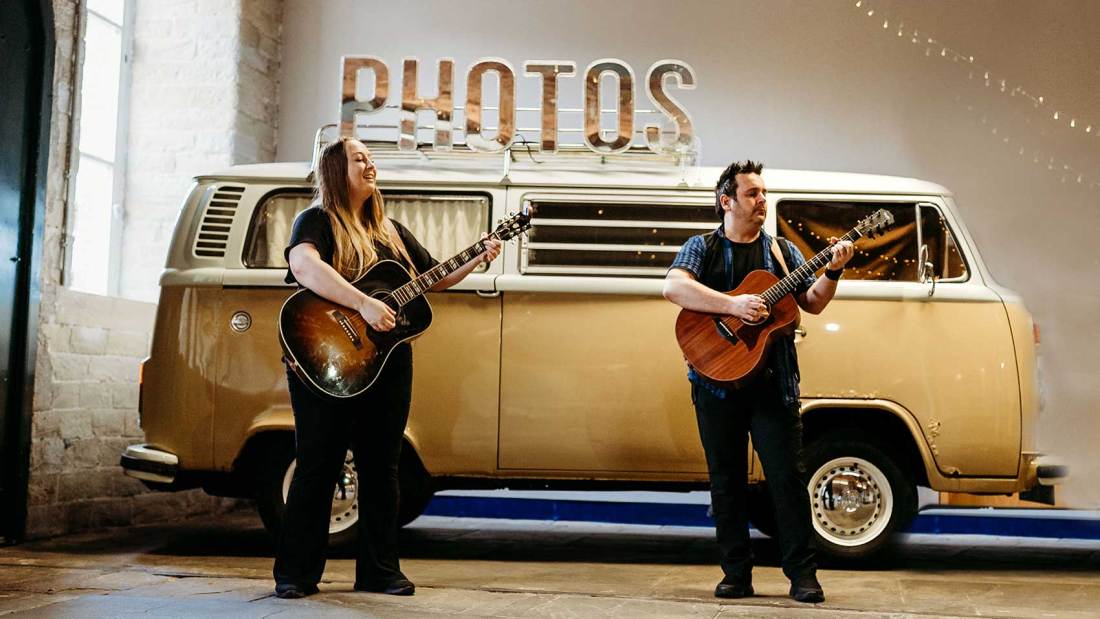 During the second lockdown of 2020, we were working away on creating acoustic albums and filming videos for our YouTube channel, with a hope that when the world opened back up again our diaries would be filled with bookings due to all of the promotional material we were creating. The Arches in Halifax were kind enough to let us come and film a couple of videos during this time, And whilst it was SO nice to get out of the house it was also lovely to be performing again, in a venue, for ourselves but hey, we took what we could get ;).

Once we had filmed and edited the videos, The Arches were lovely enough to share our videos which is where Danielle & John found us, YES! Our hard work was paying off!

Danielle & John had booked their November wedding day at the arches and were looking for an acoustic duo to perform during their ceremony, drinks reception, breakfast and live first dance – with a lively early evening looper set thrown in too. And lucky for us they weren’t sick of us by the end of the night!

Back in august of 2022 we also launched our videography company, The Taylors Film & Photo, and also offered a wedding highlight film too, which they were so excited to book.

SO our day consisted of performing and filming, two of our favourite things, we arrived early to setup for the ceremony and headed off to see Danielle John & co getting ready in Halifax, after an hour or so of capturing the cutest moments with their gorgeous little girl, Charlie we headed back tot he arches to make sure we were prepared to perform, and film Danielles grand entrance.

As an acoustic duo we’ve performed thousands or requests for our couples over the last 13 years but this list of songs, in particular Danielles aisle song hit us right in the feels! Have you heard of bread? No, not the food… the band! If you haven’t heard of them, you are missing our – Danielle wanted Soph to sing the lead on bread’s love song ‘make it with you’, and I think we were more excited to perform it than Danielle was to hear it!

Listen to our Halifax acoustic duo perform live version of ‘Make It With You’ at The Arches here:

Working alongside their amazing wedding photographer Maddie Farris, was a treat – we met Maddie earlier in the year at Caitlin and ben’s Gibson Mill wedding, after years of admiring her work online it was amazing to see how she works, check out her work here, if you’re looking for a wedding photographer – she comes highly recommended by us!

Back to the music, we performed during the drinks reception, whilst the arches were transforming the mill from a ceremony space to a dining space, and then also during the wedding breakfast too, We had some amazing comments from guests who thought they were listening to a CD until they saw us performing in the corner, which is always a nice compliment to hear we sing well live!

In amongst all the fun of switching from guitars and microphones to cameras and tripods we had the most amazing time, one of the nicest weddings of 2022 for sure, and spending the next few weeks editing their wedding video was a blast, Charlie their little girl definitely tugs at your heartstrings.

See the video, we created for Danielle & John here:

Take a peak at our wedding videography work too, our website can be found here. We offer a joint package of live music and a wedding highlight video.

If you’re looking to book An acoustic duo for your Halifax the arches dean clough wedding day, get in touch – we’d love to hear from you.
Soph & Mat