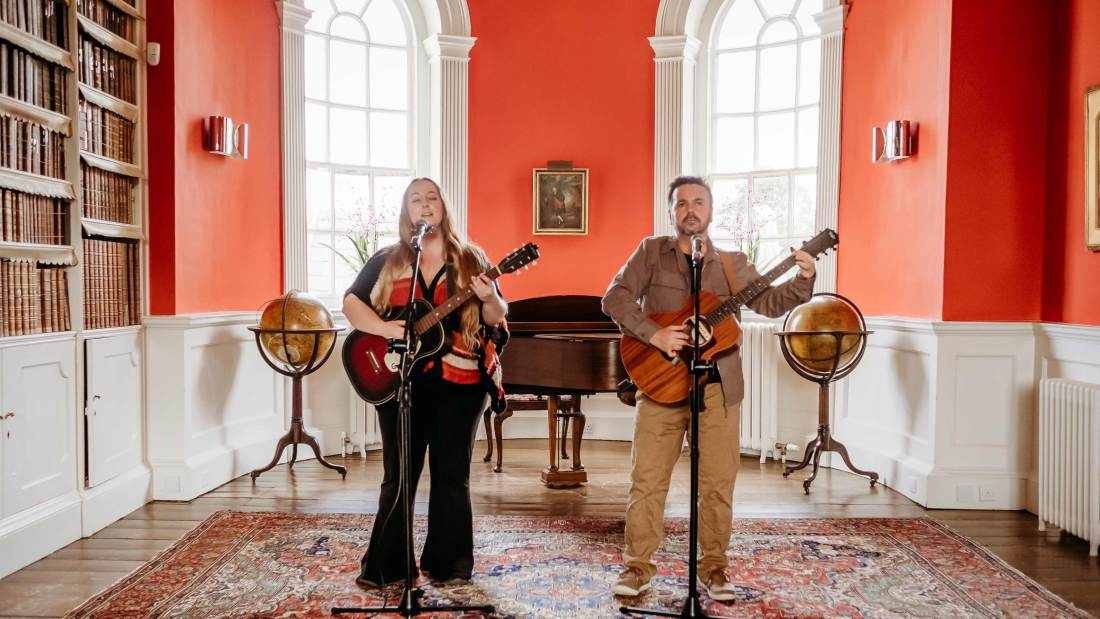 This weekend we had the distinguished pleasure of providing acoustic music along with a little live looping for the wedding of Gemma and James at the stunningly beautiful and homely Iscoyd Park wedding venue in Wrexham.

From the immaculately manicured gardens to the homely, village-like layout of the architecture, Iscoyd Park is an absolute gem of a country house wedding venue, which touches the borders of North Wales, Shropshire and Cheshire.

in a strange coincidence, for the second time this month The Distance have found ourselves playing live music as an acoustic duo in Wrexham, and we’re beginning to see why it has such a reputation for natural beauty and hospitality.

The two resident wedding co-ordinators at Iscoyd Park – Chelcie and Charlie – are warm, welcoming hosts who, from the moment we arrived, made us feel like family. They’re in complete control of every detail in that charming way that seems effortless and must surely be the result of total dedication, preparation and attention to detail.

Our first duty of the day was providing light, acoustic music for the wedding ceremony to be held in the gorgeously romantic chapel whose broad, sweeping archways put us in mind of a picturesque villa in Marrakech. As our beautiful bride Gemma made her way up the aisle, we performed our acoustic cover of The Whole Of The Moon by Mike Scott and The Waterboys. This is a song we’ve only recently added to our repertoire in spite of loving it for the longest time, and it would be a coincidence that they selected this as their Processional music, if it weren’t for the fact that both Gemma and Jamie have been regular and hugely supportive viewers of our Youtube Channel for many months, and have whiled away the time leading up to their big day by enjoying our weekly acoustic cover videos – one of the most recent of which is the beautiful Waterboys song in question.

From our position just off the ceremony room, we weren’t quite able to see when Gemma had reached the end of the aisle, but with a combination of years of experience, plus a quick and dirty calculation of Gemma’s walking pace divided by the length of the aisle that was left to cover, we took our best guess and managed to bring the song to an end exactly at the right moment. This earned us a little thumbs up from Charlie and we did our level best to make it look like we planned it that way all along 🤣

Once the vows had been said and the rings exchanged, we covered the signing of the register with Gemma and James’ second choice of song, ‘We Built This City‘ by Starship. This is a song we learned and produced for our Youtube Channel way back in the early days of the first lockdown of 2020 – which shows you just how long Gemma and James have been supporters of our work.

It’s one of our favourite covers we’ve ever done and we were over the moon that James and Gemma connected with it. It’s clear that their musical tastes are very much aligned with ours.

We always recommend that our clients choose a second song for the signing of the register, just in case it takes a little longer than the three or four minutes that the first song will give them to complete the paperwork and grab some photos. On this occasion we were delighted that they chose another of our favourite songs to cover: Dancing In The Dark by Bruce Springsteen. It’s such a great song and our version uses a little harmonica to convert that iconic synth line from the original.

Once officially pronounced Man And Wife, the happy couple swept back down the aisle to their final ceremony music selection: There She Goes by The La‘s. This is another relatively recent addition to our repertoire, having only just been uploaded to our Youtube Channel in the last couple of weeks, so it was lovely to know that James and Gemma had been watching when it first appeared and enjoyed it enough to have us play it live for their Processional..

We filmed a little bit of each song before everyone arrived into the ceremony room,

See the video below!

With the ceremony complete, it was time to head out into the beautifully maintained gardens at Iscoyd Park, to play a full hour’s set of acoustic background music for the drinks reception. We’re so glad we found the Roland BA-330 (a portable, battery powered amplifier) in these situations, as it allows us to move quickly from one location to another with relative ease, so even though we’re the last ones out of the ceremony room, we’re often set up for the drinks reception before the ‘confetti photos’ have been completed.

Our drinks reception music went down well with the assembled guests who, for the first time in over an hour, could finally relax and have a little refreshment 🤣.

Our drinks sets are generally a little more upbeat and lively while still being performed with just a couple of acoustic guitars and vocals, so we’re able to put on a fun show without intruding on the conversation… although on this occasion the guests seemed to be quite eager for us to rock out, so we had no choice but to break out our covers of Wake Up Little Suzie, Big Yellow Taxi and One Week, much to the delight of the crowd. We left them with our rendition of I Wanna Be Like You from The Jungle Book – a song we simply can’t help but refer to as King Of The Swingers, and which until recently was our most-watched video on Youtube.

As the guests moved inside for the wedding breakfast, we had an opportunity to relax and unwind for an hour or two, during which we were treated to Iscoyd Park’s famous gastronomic delights in the form of a perfectly cooked round of beef with soft, creamy mashed potatoes, red wine gravy and crunchy but tender long stemmed broccoli. It was utterly divine and was exactly what we needed to set us up for our last performance of the day: a full live looping show right there in the dining hall as the guests were polishing off their desserts.

This is a little unusual, and we were a teeny bit worried about how it would go down since our looper shows are much bigger and bolder than our acoustic work: comprising two loopers linked via midi, as well as two keyboards which provide the drum samples as well as a good chink of the melodic or chordal content of each number… and even bass guitars courtesy of Roland’s ‘Guitar2Bass’ octave effect.

We really needn’t have worried, though, because before the end of this short half-hour set the dining guests had all left their seats along with the bride and groom and were dancing, whooping and singing along at the tops of their voices. It was an incredible sight to behold, and before you go thinking that we’re blowing our own trumpets, let us assure you that we’ve done this exact material hundreds of times before, and sometimes the look on people’s faces is the same as that of a dog who’s been shown a card trick… the fact that it went down an absolute storm on this day is really more of a testament to the fun-loving, positive and upbeat nature of Gemma & James’ friends and family.

Seeing and hearing them scream the chorus of A Little Respect by Erasure right back to us as we performed was an incredible moment, and by the time we reached the final chorus of You Can Call Me Al by Paul Simon, we’d officially decided that we wanted this family to adopt us.

What a bunch of absolutely lovely, generous and big-hearted people…. we promised ourselves we wouldn’t cry….