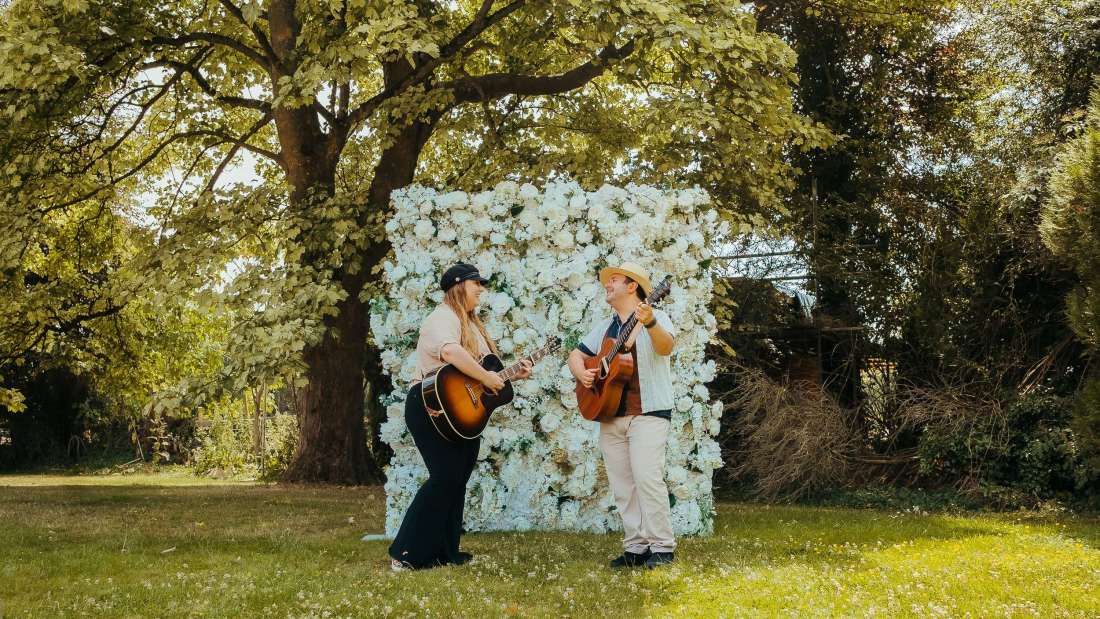 A few days ago, Mat decided to finally bite the bullet and buy a replacement Godin XTSA guitar for live shows, having run his old one into the ground over the past six years or so of continuous use. Luckily, we found a guy selling a used one in fantastic condition just an hour away from Reading, which is miles away from us, but quite close to the venue we would be playing at on Saturday.

So on the Friday, we loaded up the gear and made the considerable journey south to Gloucester to collect the new baby, and then a straight shot East to our salubrious digs for the night: The Burghfield Travelodge just off the M4. Yes, we know what you’re thinking and you’re right: It really IS all glamour.

After a fitful night worrying about the van, kept awake by cockney barrow boys and gorging on noodles, we made our way to the beautiful Herons Farm in Pangbourne for the hottest wedding of the year so far. This time, though, we were armed with hats and SPF50 sunscreen after our horrendous sunburn from the previous weekend. If you’re going to put your acoustic wedding duo out in the sun for a day, do remember to water them occasionally 🤣

We met the venue’s wedding coordinator Nicky, who was warm and welcoming and made us feel right at home, and had a brief chat with the day’s photographer PAUL (and his second shooter Jay), who were busy getting some early shots of the outdoor wedding ceremony setup (check out his amazing work and you’ll guess a sense of just how beautiful the wedding photos will turn out). The scene was lovely and it promised to be a beautiful day as guests started to arrive and find their seats in the sweltering heat…

Kerry and Dan wanted acoustic wedding singers near Basingstoke to provide acoustic duo music for the ceremony, drinks reception, wedding breakfast and early evening, and they came across our instagram while on the hunt – falling in love with our video and photo content (luckily they didn’t scroll far enough to see the one where Mat has his bum out). This means such a huge amount to us, since there must be thousands of wedding bands between Manchester and Reading. So the fact that they enjoyed our live music enough to enquire makes our hearts do a tiny dance when no one’s looking.

Kerry and Dan took advantage of our bespoke recording service, and had us record, mix and master a couple of their chosen songs for the day, one of which was the song to which Kerry would walk down the aisle during the processional. It’s a wonderfully romantic number by Ruelle called I Get To Love You and is one that we’ve been asked to play before. Later on we would discover that Kerry had herself a little moment of emotion when she finally heard us start our live performance of this song, and gripped her father’s arm just a little tighter.

Their next song choice was one from our own repertoire: I’m With You by Vance Joy, which the bride and groom first heard on one of our Albums, ‘Escape’,and later found the video on our official Youtube Channel. They just knew this should be the song that plays during the signing of the register, and they were excited to hear a live wedding band perform it (although we secretly knew that they would be so busy getting married, that all they would hear would be the sound of blood rushing through their ears 🤣)

One the vows were said and the rings exchanged, the bride and groom madde their way back down the aisle as man and wife, and chose a fantastic song to accompany this moment. Anyone Else But You by The Moldy Peaches is perhaps most well known for featuring on the soundtrack of the awesome 2008 film ‘Juno’. It’s a delightfully cute song, with sweet lyrics and a simple guitar part that lets the vocals take centre… and it’s a male/female duet, too! We really don’t do enough of those, so it’s always nice to get an opportunity.

Oh, and if you’d like to see our video for this fantastic song, check it out on youtube HERE.

While the bride and groom prepared to take their confetti shots over in the front gardens of Heron Farm, we took the opportunity to rehydrate and reposition for the acoustic drinks reception music.

We’ve recently discovered a tiny but effective In Ear Monitor system by Xvive, a Chinese company making high quality live audio equipment, and this was a good opportunity to get ourselves plugged in and feed a nice, clear front-of-house mix into our headphones.

Hearing yourself clearly makes such an enormous difference not only to your ability to sing in tune, but more importantly to the level of fatigue you experience from over-projecting in an effort to hear yourself… especially when the single, battery owered speaker you;re using for these outdoor gigs is placed facing away from you!

The U4 IEM system has made it possible for us to work better and smarter than ever, and takes no time at all to setup.

We decided to open our Drinks Reception set with Rain by Madonna – not because we were trying to jinx the glorious sunshine, but just because we hadn’t performed this one in a long time and it needed to be dusted off again. As the time wore on and the blazing sun beat down, though, we discovered yet another possible way things can go wrong: Our iPads overheated and refused to turn on until they had cooled down! The only way to achieve this was to place them in the shade of a nearby bush and hope for the best – so no more sneaky glances ant the chords for us… we were going to have to stick to stuff that’s already lodged in our brains… thank god for Copacabana by Barry Manilow!! We’ve been performing this one live for years, but have only just recently gotten around to making a video for it, but it always goes down well 🙂

We finished off the drinks reception with a slow acoustic cover of (I’m Gonna Be) 500 Miles by The Proclaimers (although our acoustic cover is based far more closely on the arrangement by Sleeping At Last – it’s absolutely gorgeous!!)

By the end of the drinks reception, the iPads were back in play and our next port of call would be indoors for the Wedding Breakfast music. We chatted with Bae and her sister Cece as we set up our gear, and marvelled at the technology required to create bubbles that refuse to pop on contact with a surface… whatever will they think of next? Cars that don’t move? Surely the popping is half the fun?!

Dan and Kerry had asked that we reserve the second of the two songs we recorded for them until during the wedding breakfast, so once the guests were seated and the bride and groom had cut the cake, we opened up the live background music with light acoustic versions of Depth Over Distance by Ben Howard, and a few others before finally arriving at Kerry and Dan’s special request, If You Love Her. This is a beautiful song by Forest Blakk, with a duet version released later that features Meghan Trainor. It was this version that the couple asked us to record, and the version we performed here live for the first time.

They and their guests loved it, and we even got a little smattering of applause which is quite the boast when you’re supposed to be playing quietly in a corner – and means all the more when folks have to put down their cutlery.

Listen to our version of ‘If You Love Her’ here:

As the early evening drew in and the temperature began to drop to a less oppressive level, we moved outside for our final performance of the day – a live looping set consisting of midi-linked loop pedals, electronic drums, synths griggered by our guitar strings, and lush vocal delays and harmonies courtesy of a couple of great FX units. We whiled the night away with live looping covers of Lovely Day by Bill Withers, Lovefool by The Cardigans, and our enduring favourite, Hooked On A Feeling by Blue Swede, before bringing our last set to a close with Everywhere by Fleetwood Mac (can you tell we love that band?!)

As we packed down at the end of the day, we chatted for a while with Kerry and Dan who echoed a sentiment we’ve been hearing a lot lately: that they were so busy getting married, they didn’t really get a moment to just watch, listen and enjoy our acoustic wedding music… and that, if they could do it all again, they’d ignore all their guests and just get down with us on the dance floor. We smell a renewal of vows in a couple of years or so… 🤣

Seriously though, thank you so much Kerry and Dan for being such a wonderful, sweet couple and to your friends and family for making us feel so welcome throughout the day. It turns out the only time Mat can really pull of a hat is when his survival depends on it.

Some photos of the day at herons farm, Berkshire…